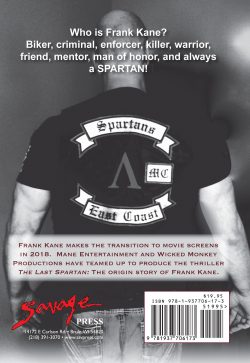 Frank takes his “adopted” family on an idyllic island vacation only to be discovered by the Red Hand cult whose leader wants Frank’s life as a trophy.

Can an innocent get-a-way be much more fun than getting ambushed, staked naked to the ground, flayed alive, discovering the secret to a long lost pirate treasure worth billions? Prolly not. Well, there is Helen (Aphrodite) who follows Frank (Poseidon) to the island and Cyrus (Zeus) who spies on Helen who is spying on Frank and Spanish Johnny (Hermes) who “executes” Cyrus’ orders with brutal efficiency….and don’t forget Helios, Prometheus, Atlas and the little meth cooker Neil (Hades) who is the worst of the worse.

In the meantime, Jenny, Caron, and DC are having the time of their lives jet-skiing, sun-bathing, bar-fighting and getting thrown in jail. #heckuvanislandgetaway!

Frank Kane makes the transition to the big screen in 2018. Mane Entertainment and Wicked Monkey Productions have teamed up to produce the movie thriller The Last Spartan the origin story of Frank Kane.

There are no reviews yet.

Be the first to review “SPARTAN KRYPTEA” Cancel reply

This site uses Akismet to reduce spam. Learn how your comment data is processed.