Prologue from The Last Spartan 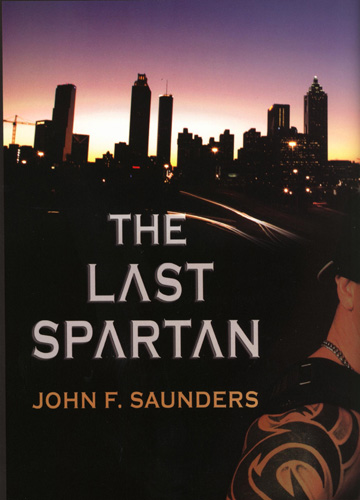 Frank Kane was dying. He was wounded to pieces. At six feet, four inches and close to two hundred and twenty hard muscled pounds, that took some doing. He tried to prop himself up against the tree but found his legs weren’t working anymore. He stared down at his blood-soaked shirt. The bullet holes were barely noticeable now. Just small innocent looking punctures. They seemed to have stopped bleeding. The blood still seeped steadily from the knife wound in his abdomen. He pressed harder with his right hand, trying to slow the bleeding. A thick, pink loop of intestine slipped out between his fingers, and he carefully tucked it back inside. His thin leather gloves were stiff with blood. He had meant to discard them after the wet work like always. Now, it didn’t matter.

He looked over at the motorcycle. It was a BMW, one of the 1200 series, painted a deep, metallic, ocean blue. His drying blood had stained the gas tank and sides with long, dark streaks. It was a sweet ride. One hundred BHPs. Twelve hundred CCs. The bitch was super fast, that was for sure. He didn’t know how far he had gotten before the tank finally ran out, but then, it wasn’t his bike. It belonged to Spanish Johnny. It was the first one Frank had found outside the safe house with the keys still in the switch.

God, he felt tired. Exhausted. Frank wanted to close his eyes and sleep, maybe for a thousand years. He was beyond pain now. His body felt numb, somehow dulled, even a little cold. He knew his body was going into shock. At least it didn’t hurt anymore. Well, just a little.

The Spartans had enjoyed a good run. For nine years they had been the most powerful motorcycle gang on the East Coast. Nine years of taking names and kicking ass. They were so small when they started, no one even noticed them. Cyrus had named them. He had taught them, showed them the way. His vision had guided them. He had made them strong, relentless, feared. Like a modern day Lycurgus, he had molded them on the design of ancient Sparta. At their peak no one dared to oppose them. They worked with impunity, even filling the niches for the big boys in organized crime.

It couldn’t last. They had known that from the start. It was all over now. Their strength had doomed them. The government brought massive pressure from the F.B.I., A.T.F., D.E.A., and all the alphabet boys. Other East Coast bike gangs were tempted to try and reclaim their old turf. West Coast gangs moved in, probing for weaknesses so they could expand their own territories. The Spartans started to lose control of their affiliates, helots as Cyrus liked to call them, who began to revolt. Attacked. Infiltrated. Betrayed. That was what happened in Greece to the ancient Spartans, too. Frank knew Cyrus was dead. He had to be, otherwise they would never have had the balls to try to burn Frank. Frank was the Spartans’ chief enforcer. Too bad he was dying, he thought. There was a lot left undone. The hitters would be coming for him again. Soon. They had to. You couldn’t leave a man like “The Hammer” alive. It would be suicidal.

He heard the engine off in the distance. Sounded like a truck. Old. Maybe a Ford F250. Probably four cleaners, maybe five counting the driver. He would have sent five. Just to be safe. Make damn sure he was down for good. Make sure Frank Kane never came back to haunt them.

He had dumped his twin Colt .45s at the scene. He still had a gun in his boot. It was a small double barreled derringer. It carried a couple of .44 magnum rounds in the pipes. The gun wouldn’t save him, but it would send a couple of them to Hades before him. He tried to reach it. His left arm didn’t seem to have any strength in it. He concentrated for ten seconds, forging the will. He tried to extend his left hand toward his boot again. The fingers stretched and the hand trembled, but the arm wouldn’t move at all.

Frank sighed and leaned his head back against the tree. He gazed up into the bare branches of the tree. The sky overhead was clear and blue and pitiless, just like his eyes. His long, dark hair blew back in the cool breeze. He would have liked to have seen the ocean one more time. Smell the salt air. Listen to the roar of the waves as they broke on the shore. Drink a last cold beer with the sun warm on his face.

He pushed his swollen tongue over his lips and tasted the blood caked in his beard. It tasted like he had a mouth full of new copper pennies. Damn, there was a lot of payback out there needing to be done, and he wasn’t going to make it. He closed his eyes and imagined himself like Odysseus adrift in a hollow ship on the restless back of the wine dark sea. He heard the truck closing in. Heard it skid to a stop before him. A gentle breath of wind brushed against his cheek. Frank wasn’t afraid. Death reached out and took him then. He was the last Spartan.