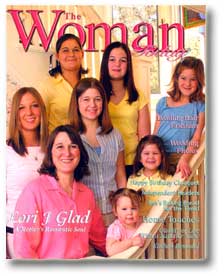 April/May 2004
Article by Sheryl Jensen
photographs by Roger LePage photographer
The Woman Today Magazine: The Family and Home Magazine of The Twin Ports

Lori Glad is a self-avowed romantic.  A stay-at-home mother of six daughters and grandmother to a two-year-old girl, Lori has turned her “secret” avocation of years of filling notebooks with her romance stories into her first published novel with a hometown setting, Summer Storm.  Her central character, Janine, a shy librarian who lives with her widowed mother, finds romance on the Lakewalk with Alberto, a dashing Spanish aristocrat.  Area readers will have fun identifying the local landmarks in the story, and at the same time be swept away by the trials and tribulations of the unlikely herione that bring her into the inner circle of the Spanish royal court.

The jewels, gowns, and pageantry of a European royal court are far afield from Lori Glad’s day to day life in Duluth, Minnesota.  Yet, she has been imagining and writing love stories from age ten when she penned her first romance with two horses as the “lovers” of the tale.
Lori was born and raised in Duluth.  Her father, Charlie Lemon, an area businessman, used to own an area disco club called the Yellow Submarine. It was there that Lori met her future husband Mark Glad.  He was the bouncer for the club where she collected the cover charge from patrons at the door.  Mark still works for Lori’s dad at CW Chips as his kitchen manager and chef.
In 1985, the Glads purchased the home where Lori grew up and have lived there ever since.  Lori, herself from a family of eight siblings, has raised her six daughters in the familiar surroundings of the home she lived in from age 3 to 18.  She says she often has fond memories and “flashbacks” of her life there as a child.

“The best part of living is being a mom,” Lori says with a broad smile on her face. And except for a few part-time jobs over the years, she has remained home with her children. In this busy household of six daughters, who range in age from 4 to 22, Lori has used her rare moments of free time to write her romance stories.
She has always written in longhand in notebooks, amassing quite a collection of her stories over the years. The girls have felt completely free to write little notes to her, to draw pictures, and even to color in Lori’s manuscript notebooks. Now, when she looks back at the notebooks, they are treasures, not only for the romantic stories of her invention, but also because they are filled with precious notes and pictures from her daughters at various stages of their lives.
Describing her life, Lori says, “I have so enjoyed watching the girls grow up, and it has happened so fast. I was blessed to be able to stay at home with them.” Lori has been a “Girl Scout mom” for over two decades as each daughter has joined.
Of her daughters, Lori says. “They’re all so different, different personalities, likes, and dislikes. It’s about figuring out the best way to connect and raise each of them at different ages.”
This household of so many women is also a special challenge with only one main bathroom. “We’re lucky that we have some early risers who start the schedule at 6 a.m. with their showers, and the later risers fit in their time later,” says Lori.
A favorite family activity for Lori and her daughters has been to go for picnics at the Zoo or on Park Point.  Cooking and baking together has also been a favorite bonding time for Lori and her girls. Everyone pitches in with the cleanup and family chores, and the older sisters help out with the younger ones to make the house-hold run smoothly.
An now, Lori’s two-year-old grandaughter fits right in too, becoming as Lori describes her “like another one of the sisters.” And what of the lone male in the Glad home? “The girls all spoil and pamper him like crazy.” Lori says of her husband Mark.  The girls enjoy going fishing with their dad.
The family loves vacationing together at Walt Disney World. Lori also still wants to go on her dream vacation of horseback riding in the Rockies, speculating about that being a perfect place to set another romance novel.

Lori had made a few attempts over the years to submit her stories to publishers, but with no success. As she admits, “It was a bit painful. It didn’t make me stop writing, but it did make me stop trying to publish.”
After a conversation with Anita Zager, owner of Northern Lights Bookstore, about the possibilities of working with a local publisher, Lori finally worked up her courage to call Mike Savage, owner of Savage Press. As she recalls, “I was so afraid to call him. Finally, last January, I just decided I’m doing this if it kills me.”
Savage read her manuscript, liked it, and eventually worked with her to edit the book and prepare it for publication. Of her work, Savage says, “Lori has very clear characterizations, and she has keen insight into the subtleties and nuances of relationships.  She understands intuitively what I know to be true of good fiction, that less is more.”
On November 6, 2003, the book was published. Lori had a publishing party for friends and family at her father’s restaurant. Recalling the swirl of emotions, she says, “I looked at the book with its beautiful cover and my name and I thought, ‘This is unbelievable. It has to be a dream.'”
Savage adds, “Fiction by local authors is a favorite genre of mine. Hers was the first romance work that had sufficiently engaging characters.” Mike and Lori have plans in the works to publish five more of her novels over the next few years, all romances with local settings but different characters from Summer Storm.

Reading Between the Lines

Lori doesn’t think she is writing about herself as a character in her novels. Nonetheless, she acknowledges that her view of romance does come from her relationship with her husband.
“My husband is my best friend. I see romance as getting to know a person so well that you know they are the right one for you. Something about you clicks with that person, and something as simple as holding hands is romantic. Yet there is a spark there too, when that person walks in a room and your scalp tingles.”
Drawing her inspiration from a variety of sources, a line from a song, an article in the newspaper or a magazine, or even in dreams, Lori seems unlikely to run out of ideas for stories any time soon. It seems certain, however, that each new novel will lead her readers along the rocky path of romantic intrigue.
Meet Lori Glad at the launch party for the release of her second book, Northern Lights Magic, on May 6 at 6:30 p.m. at CW Chips in Duluth. The event is open to the public.